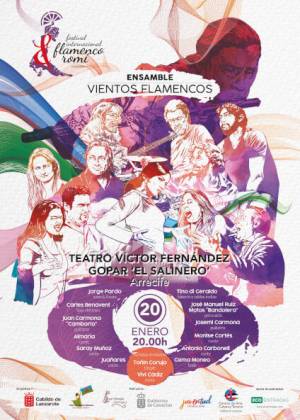 A constellation of flamenco stars in Lanzarote. The Romí International Flamenco Festival brings together, for the first time in Lanzarote, an authentic cast of legends in the show Ensemble Vientos Flamencos (Flamenco Winds). A first-class show featuring some of the most revolutionary figures in the history of flamenco.

Jorge Pardo (sax and flute), Carles Benavent (electric bass) and Tino di Giraldo on drums, who will showcase the flamenco jazz in which they were pioneers. The guitars of Juan Carmona “El Camborio” and Josemi Carmona, key figures in the band “Ketama”, will be on guitar. On percussion, the cajón master Bandolero. Saray Muñoz, daughter of Tina (Las Grecas), currently the lead singer of the Ballet Nacional de España, will show the enormous quality of her voice alongside Montse Cortés, known as ‘La perla de La Mina’, the most sought-after voice for dance and a key figure in Antonio Canales’ shows. Her latest work, ‘La rosa blanca’, has been produced by Javier Limón.

And also on vocals, Antonio Carbonell, known for having represented Spain at the Eurovision Song Contest in 1996.

The cantaora Almaría and the voice of Juan Carrasco Soto “Juañares” will also be present. Gema Moneo from Jerez, a genuine representative of the purest gypsy dance, will be dancing.

The Romí International Flamenco Festival was created in 2014 by its artistic director, José Heredia Santiago, and the courage of the women of the Romí Kamela Nakerar Association to pay tribute to gypsy women.